Why I Will Never Quit

This blog post has been rummaging around in my brain for a while.  I guess the best way to start this post is how it came to be...

For a while now I've seen educators share blog posts written by other teachers saying things such as "I had to leave the classroom because....", or "I quit today because...." or a multitude of other things.  And some of these posts were written by award winning, Teacher of the Year for their state, kind of people!  And I watched and listened as other teachers cheered for them, and made comments like "they're so right!", "good for them!", "I couldn't agree more!"

I learned that though my school or district may have a view of "testing is king", that I didn't have to.  I flipped my classroom, I went fully project based, and I focused back on the reason why I became a teacher; the kids.

I learned how to work within what arguably is a broken school system.  I didn't quit.  I didn't give up.

And what if I had?

I look at the children I work with every day and my heart breaks.  Those kids are constantly told to dream big, to try hard, to set goals.  And every day I show up I prove to them, one more time, that I'm there.  But over the last few years, I have read about the teachers who walk out.  I've experienced first hand this year, when teachers walk out.  And I've sat and cried.

I've walked kids to their cars in the afternoon and had them ask me "will you come back tomorrow?".  I've had teachers this year come to me in tears at the beginning of the year and ask me "why do these kids ask me every day if I were coming back?".  That's the kids I work with.  That's the broken hearted I see.  That's the problem I'm working with my team to fix.

What are we teaching kids when we quit?  We teach them that when things get hard, and when we don't agree with something, then just quit and find something else.

What if Martin Luther King Jr had quit when others were telling him he was worthless, when he wondered about the impact he was having, when the system he was existing in was broken.

What if Oprah had quit when there was no one like her on television, when she told she was too fat, when times were hard and she didn't have the ratings?

What if Thomas Edison had quit when the first hundred times his lightbulb didn't work, when others told him he was crazy, when he was trying to create something that didn't currently exist.

I could list for days people who changed the face of our history because they DIDN'T quit.

Teaching is a hard profession.  It's incomprehensible to others who aren't in education.  The battles we have to fight, the testing, the paperwork, the absent parents, the helicopter parents, the lack of funding, the poverty, and so on and so on.

I know in my heart that my most important job as an educator is to love kids and to convince them that they have something absolutely incredible and unique about them.  To remind them that they matter.  The academics is a bonus!

We can't step aside and say the way I'm going to help is by walking away.  Who does that really help?  No one, but yourself.

So I challenge you, on those rough and difficult days.  On that days where you aren't sure you can do it even one more day.  I challenge you to lean down and look into a child's eyes.  To see the hope they have.....to see their longing questioning of "Will you come back for me tomorrow?".  I hope you answer with a resounding yes.

I can't ever imagine abandoning children in a system that needs fixing.  I'm here.  I'm present.  And I'm going to stand tall, stand proud, and stand bravely for those kids who need me to.  For those kids who have no one else willing to fight for them. 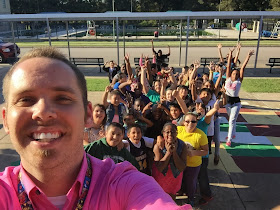